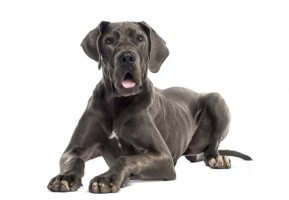 This is Henry. Henry is a five-year-old Great Dane who has been in a spot of trouble recently.

Henry presented one afternoon as he was restless, had laboured breathing and was drooling. Examination revealed a bloated abdomen. Henry was immediately admitted for treatment as it was suspected he was suffering from a life-threatening condition known as Gastric Dilatation-Volvulus (GDV).

GDV occurs when the stomach of a dog bloats with gas and food. The stomach then begins to twist, cutting off the blood supply to the stomach and eventually the spleen. The dog is unable to burp and release air from the stomach so gas continues to accumulate. The condition is almost always fatal if not treated rapidly and is considered an emergency.

Deep chested dogs are a particularly high risk of suffering from GDV. Great Danes, German Shepherds and Weimaraners as well as St Bernards, Standard Poodles, Irish Setters and Newfoundlands are all at risk. The only treatment for GDV is an emergency surgery. The stomach is untwisted and sutured to the abdominal wall to prevent it from twisting again. This procedure is known as a gastropexy.

A gastropexy can also be performed as a preventative measure (often at the time of de-sexing). Other precautions to prevent bloat include not exercising your dog before or after feeding and offering smaller meals rather than one large meal. Thankfully Henry’s surgery was successful and he is now recovering from the ordeal.

If you have a deep chested dog we recommend you discuss a preventative gastropexy with us.