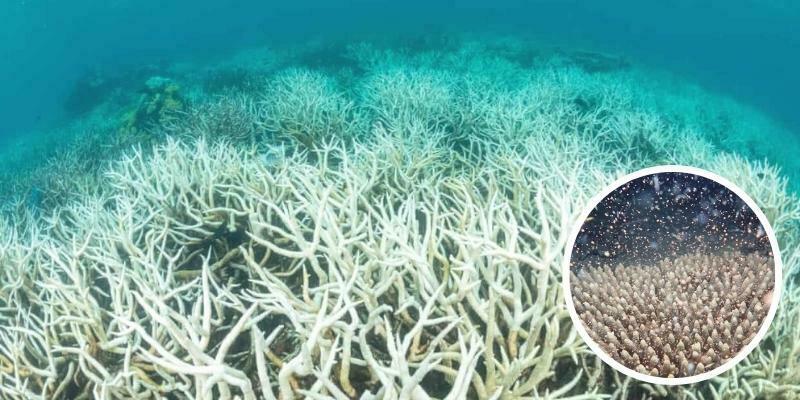 Climate damage on the Great Barrier Reef: can we hit “reef-resh”?

Climate damage on the Great Barrier Reef: can we hit “reef-resh”?

Image sources: the ABC, the Guardian

Hope is in the air – or better yet, in the sea – after a recent coral spawning event took place in November last year. This annual spectacle in the Great Barrier Reef sees entire colonies of coral reef simultaneously release gametes (tiny reproductive cells) into the water to join together and create new coral.

During the event, the reproductive cells float up to the surface, resembling clouds made up of billions of white, yellow, red and orange flakes when viewed underwater.

Incredibly delicate, the event can only occur during extremely specific conditions. In order for the reef to erupt, the event must take place at night, after a full moon. Ocean temperatures must be above 26 degrees for a full month, and the water around the reef must be calm.

Since 1998, 98% of individual reefs along the Great Barrier Reef have been hit by coral bleaching caused by rising ocean temperatures from global heating.

Coral bleaching occurs when ocean temperatures get too warm for the algae that provides nutrients for the coral to survive. When the algae leave, so does the coral’s colour and vitality, as well as the ecosystems that are supported by the algae, leaving only a sickly white skeleton.

Coral reefs are considered one of the most sensitive ecosystems to global heating and new research published in the Global Change Biology journal predicts that even if we are able to keep global warming to 1.5°C, bleaching strong enough to kill coral permanently would likely still attack the reef more than three times a decade. Lead author of the study, Jen McWhorter, warns that global heating above 2°C would be “very, very bad” for the Great Barrier Reef.

For the last few years, coral from across the reef have been collected by The Australian Institute of Marine Science to study how temperature tolerant they can be, so that coral with higher heat tolerance can be sourced and bred back into the reef. This method of ‘coral IVF’ aims to help the reef become more temperature tolerant as oceans continue to heat up.

Marine biologist Gareth Phillips, who captured the reef’s spawning event on film with his team, encourages that it is a “sign that the reef is recovering”.

However, James Cook University professor and a leading expert on the effects of global heating on coral reefs, Terry Hughes, reminds us that corals can only recover so far, and “the end point depends on how much warmer we are prepared to allow it to go.”

Learn more about the Great Barrier Reef from the ABC, the Guardian and the ABC.