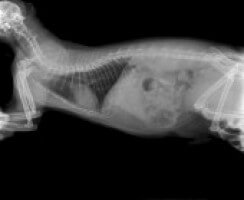 Can Cats Get Asthma?

They certainly can and this life altering disease is very similar to asthma in humans.

The disease involves the small airways in the lungs over-reacting to the presence of a irritant or an allergen. This leads to an inflammatory response and an increase in mucus production. The reaction also results in contraction of the small muscles around the airways causing them to narrow. Both the mucous and the narrowed airway means a cat has difficulty breathing.

Signs to watch out for:

It is thought that irritants such as cigarette smoke, pollens, dust from cat litter, perfume and moulds can contribute to the condition. Parasites, heart disease and obesity may also play a role.

Diagnosis may include blood tests, x-rays, bronchoscopy (camera in the lungs to evaluate the airways), or an airway wash to isolate cells to look for inflammation or bacteria.

There isn’t a cure for feline asthma but it can successfully managed with medications that open up the airway passages or modify the inflammatory response. Just as in human asthma, medication is sometimes administered through a special inhaler.

It is important to recognise that asthma can quickly become a life-threatening situation, so any cat with a cough needs to be examined by us as soon as possible