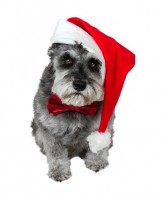 Leo and the Christmas ham.

Leo and the Christmas ham

Leo the ten year old schnauzer usually loves Christmas. And it isn’t because of all the new toys he finds in his stocking, it’s because he usually gets some leftover ham! That was until last Christmas.

On Boxing Day last year, Leo developed a painful and potentially life threatening condition known as pancreatitis. Leo’s pancreatitis came on very quickly. He was vomiting, hunched over in pain and was becoming dehydrated. He was admitted to hospital and treatment was started immediately. Blood tests would confirm that he was suffering from pancreatitis but early treatment was vital. This involved restricting food, pain relief, antibiotics and rehydration via an IV drip.

When a meal is eaten, the pancreas secretes enzymes required for digestion. In some cases, an overly fatty meal (such as leftover ham) can trigger a “leakage” of these enzymes and the pancreas starts to digest itself. This can happen either all of a sudden (acute), or over time (chronic). In both cases, a pet can end up very unwell and in some cases, the condition can be life threatening.

After a few days in hospital, Leo was discharged with strict feeding advice and a low fat diet. The likelihood of pancreatitis striking again is high so there will be no more leftover ham for Leo this Christmas. He will be getting a low fat treat and lots of toys instead!

It is not uncommon for us to see pets with pancreatitis and other gastric upsets over the festive season so please take extra care around meal times and don’t let your pet overindulge!

If you are worried about your pet you should always phone us for advice.

Oh and if you need a laugh you should check out out these hilarious Christmas pet illustrations via boredpanda.com. We think all people with pets will be able to relate to at least one!