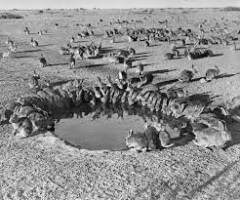 When European Rabbits were introduced into Australia at the time of white settlement, nobody could have predicted how well the species would adapt and thrive in the Australian environment. Recent studies show that wild rabbits are affecting over 300 threatened Australian native animals due to direct competition for food, or from environmental destruction. Over the years, there have been many attempts to control the wild rabbit population, from poisoning and shooting to ‘rabbit-proof’ fences. In more recent years, a number of rabbit diseases have been released to good effect, but these diseases can unfortunately also affect domestic or pet rabbits.

Pet rabbits cannot be vaccinated against myxomatosis, but there is a very effective calicivirus vaccine.

Recently there have been TWO new strains of the calicivirus vaccine identified, which have already been active in the Eastern states of Australia. One is a variation on the current strain of calicivirus (RHDV1-K3), while the other is a different strain entirely (RHDV2).

Other precautionary steps you can take to ensure your precious bunny is not at risk include:

With this advice, we hope that your pet rabbit will remain happy and disease-free for years to come. Please contact the clinic if you have any concerns or questions.