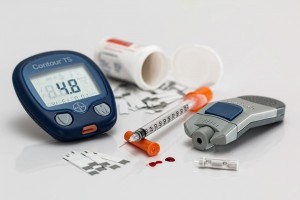 Jackson the cat came in for a check up. He had been drinking copious amounts of water over the past month and even though he usually had an excellent appetite, he was looking ‘a bit skinny.’

Examination revealed that Jackson was dehydrated and had lost nearly 20% of his body weight in just three months! A blood test indicated he had high blood sugar levels (glucose) and a urine test confirmed the presence of glucose in his urine. A diagnosis of diabetes was made.

The urine test also confirmed the presence of ketones, signalling that Jackson was in ‘ketosis’, a potentially life threatening condition that can occur when the body can no longer cope with the disease.

Diabetes is an ‘endocrine’ disease where the body fails to produce enough insulin to help move sugar from the blood stream in to the cells for energy. It is similar to type 1 diabetes in people as patients generally require the administration of insulin once or twice daily.

The four main signs to watch out for:

Jackson was admitted to hospital for intensive care. He was placed on an intravenous drip and insulin therapy in the form of injections was commenced. Thankfully he responded quickly and started to improve overnight.

Management of diabetes is life-long and involves regular blood tests and monitoring. Some cats can go in to remission if diet and weight are managed correctly. Dogs usually require insulin treatment for life. Some patients do not respond as we would expect so further investigation in to other diseases sometimes needs to be considered.

If you notice any changes to your pet’s daily habits such as a change in appetite or thirst, it’s a good idea to arrange a check up with us as soon as possible as there are many endocrine diseases that can present with similar signs.