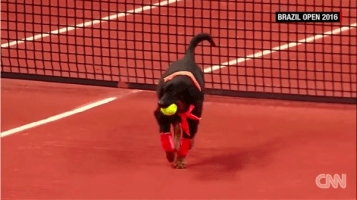 There’s been plenty in the media recently following an upset at the US tennis open, but here’s a heartwarming tennis story for you! It has been reported that shelter dogs are being ’employed’ as ball boys and girls at the Brazilian Tennis Open.

The initiative originally started in 2016, where four shelter dogs took to the court to help collect the balls. They won over many hearts and were all adopted. One was even named Serena after Serena Williams!

Fast forward to 2018 and six more dogs were allowed on the court, fetching balls during the warm-up and winning many more hearts! What a great initiative to help find loving homes for these dogs! You can read more here, and see some footage on YouTube here.