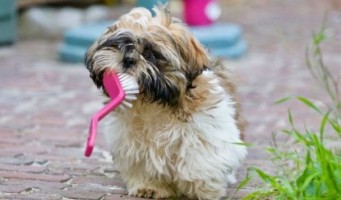 When it comes to pet behaviour, there’s a saying we use in the veterinary world: “There’s no such thing as bad behaviour, it’s just normal behaviour in an inappropriate setting.” Put simply, this means what you may perceive as “bad behaviour” such as barking at the doorbell, is a normal response for a dog who is trying to alert you to the fact that someone is at the door (it’s just not desirable from a human’s point of view).

In some cases, ‘bad behaviour’ may actually be a symptom of something else that is wrong in your pet’s world (such as a medical problem or pain).

When it comes to dealing with some of these issues, we are the best people to talk to. A behavioural consultation and exclusion of other medical issues are essential. We will be able to put together a plan for your pet and make some recommendations to deal with inappropriate behaviour. Here are just a few of the more common behavioural problems we discuss with our clients on a daily basis:

Spraying: This problem is frequently reported to us by cat owners. It looks a bit weird but usually involves cats backing up against a vertical surface (such as curtains) and urinating. The behaviour is typically brought on by stress and territorial issues.

Scratching: Scratching is normal cat behaviour and is used to communicate or mark territory. It’s something they must do and it can be easier to direct their scratching towards an acceptable surface, especially in the early stages, rather than trying to stop the damage later. Ask us for more advice.

Barking: It’s important to understand that barking is a normal way that dogs communicate. Dogs might bark to get attention, during play, hunting, territorial defence, and in fearful and anxious situations. We can help you identify the reason your dog is barking and provide advice about how to control it.

Destructive behaviour: Dogs do not destroy things vindictively and there are many other reasons your dog may be destructive including separation anxiety, boredom, inadequate exercise, investigation, fear or phobias. We’ll try to determine the cause of your dog’s destructive behaviour and what to do about it.

If you have a question about your pet’s behaviour, we are the best people to ask.